Morning With Reagan (A Short Story) 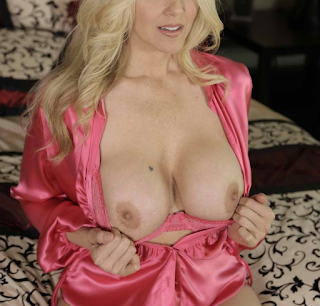 I hoped that shutting my eyes would help. That somehow I would open them and things would be back to normal. Sadly, I’m wrong. I look down at my body spread out on a bed not my own. Hair covers my thick muscular legs and a large, soft penis rests down against my left thigh. This is not the teenage girl I was yesterday. I want to reach out and touch myself, but these new fingers of mine just feel strange and swollen – so much thicker than my real hands.

I’m so absorbed in my own thoughts, it takes me a moment to register that I’m not alone. A woman in a pale pink satin robe is gazing at me with equal parts lust and uncertainty. I know she’s got nothing on underneath the robe, as she threw it on after I freaked out a few minutes ago. Her name is Reagan, and she’s my best friend’s mother, but this new body of mine is seeing her in a very different way. A part of me wishes I hadn’t pushed her off me when I found myself here in this man’s body. The slurping noise was the first thing I heard, then the sensation coming through my crotch. Looking down and seeing Reagan wide eyed, gazing up at me with those thick lips wrapped around a cock that was somehow mine. As good as it felt, I still freaked out and pulled her off my dick, the suction of her mouth gripping to every ridge of my manhood as I tore her away.


I knew who I was now. I was Hector. I was in the body of my best friend, Daisy’s, father. As she wiped spit and precum off her chin, Reagan explained that she was teaching Hector a lesson. If he wanted to jerk off reading stories about being a girl, then she was going to show him what that was like first hand. She said I had been such a good friend to her little girl for so long, that she hoped I would see this situation as a reward. As she ran a finger up my leg, I felt the blood rushing down in to my dick. I was getting an erection. Reagan smiled and said surely I couldn’t resist the pleasures of my new male flesh. As wrong as this was, and as much as I was fighting it, I knew she was right.
Daisy had always mentioned her mother was a bit weird and a bit self-centred, but having a bruised ego over Hector reading a few erotic stories? Surely there were worse things a man could do. In a way, Reagan was giving him something he wanted, but on her terms and possibly at the cost of his body. I ran through all of this in my mind, but still the pounding lust of my flesh was longing for it’s partner. It’s wife. My wife.

I reached forward and took Reagan’s hand in mine, removing it from my leg and pulling her closer. The older woman’s perfume was off to my usual tastes, but comforting and familiar to Hector’s nostrils. She hesitated for a moment, and I was surprised at how I didn’t, reaching my fingers in to the opening of her robe and gliding it off her shoulders. Reagan’s body was older and aged, but I could see that at some point she was probably as beautiful as her daughter, maybe more so. It felt like things were moving in slow motion as her breasts came in to view, before I stopped at the tie of her robe. Reagan undid the rest, exposing her shaved vagina to me.

As Reagan leaned in for a kiss I whispered that we shouldn’t do this, but was just met with a wet tongue filled pash as Reagan flattened her body up against mine, c-cup breasts squashing against my flat pecs, and my dick growing hard, brushing against her thick flabby thighs. She scratched down my back and I broke my kiss to grunt with satisfaction, that I never heard, or wanted to hear from my friend’s parents. I tried to pull her close but she pulled away, positioning herself above my now fully hardened member. My whole body tensed up as she began to allow my cock inside her, slowly, bit by bit. It wasn’t enough as I grabbed her tush with both my hands and pulled her down, slamming our hips together.

The undulation of Reagan’s womanly hips was divine, and having known an inattentive lover or two, I fought my way up and wrapped my big arms around Reagan’s shoulders, pulling our bodies closer, mashing them together only breaking to allow me to get a good mouthful of her floppy, bouncing tits or to rest my face in her neck, sucking hard enough to give this woman a good hickey.

I don’t know if she faked it, but she definitely came first, her hands gripping my shoulders as she shook and moaned. I too was close, the surge building and building to a climax as I felt the rush of fluid pour through my dick in to Reagan, as I let out an almighty yell. By the time I could see again I saw the crack in the bedroom door, and my own face staring back at me! Reagan noticed too and teasingly pulled all my length out of her floppy folds before rising from the bed.

Hector looked horrified, knowing what had just gone down with his body and he looked at Reagan with pleading eyes, begging her to change him back. I felt bad for the guy, but I was also in the afterglow of the best sex of my life. I leaned on Reagan for support, my legs still wobbly from the force of my first male orgasm. We hear a door open and we all know what’s going on. My daughter is home. I mean. Daisy is home. Reagan is quick to pull her robe back on, and I realize how many times she’s greeted me like this, and I paid no mind to what she had clearly been doing.

As Daisy calls out for “Stacey”, I almost respond, but a threatening glare from Reagan to Hector makes him whimper out a response in my voice. The girls are apparently going out with their boyfriends tonight. I had forgotten all about Don. I watch from the door as Reagan escorts a cowering Hector down the stairs, where Daisy, her boyfriend and Don are waiting. Reagan explains that “Stacey” hasn’t been feeling so good, and that Don needs to take “extra good” care of her tonight.
Don slips an arm around who he thinks is me, and I feel almost jealous but even he’s never made me feel the way Reagan just did. Hector looks so sheepish as Don wraps his arm around his waist, and his knees knock together automatically. I remember the flush of moistness between my legs at the sight of Don and Hector appears to fall prey to that too. My mouth is agape as Reagan slips a condom to Don while Hector isn’t looking, and it dawns on me how far this is going to go. Is some man going to have sex in my body? Surely, I’m on no higher ground to protest against that.

As the teens head out every fibre in my body says I should burst out and race down the stairs to explain everything, but as Reagan waves goodbye at the door, the wind blows in, blowing up the back of her robe, exposing that fleshy ass that I was grabbing not too long ago. I can’t have only one taste of Hector’s pleasure. Reagan saunters up the stairs and I feel compelled to meet her at the top. My dick rises to attention once again and maybe Reagan has everyone exactly where she wants them, but should I really care right now?

Add comment
Load more...
Newer Post Older Post Home
Subscribe to: Post Comments (Atom)
A long time body swap caption reader. Finally posting all the caps I was too afraid to post before. Sorry if I'm late to reply to comments. I'll usually write a batch of 20-30 captions and schedule them, before I check the blog again.


Also: there's a DeviantArt page for some of my swapping art.

Also, also: there's a suggestions page now if you have any ideas for me. I'll try to get to them!